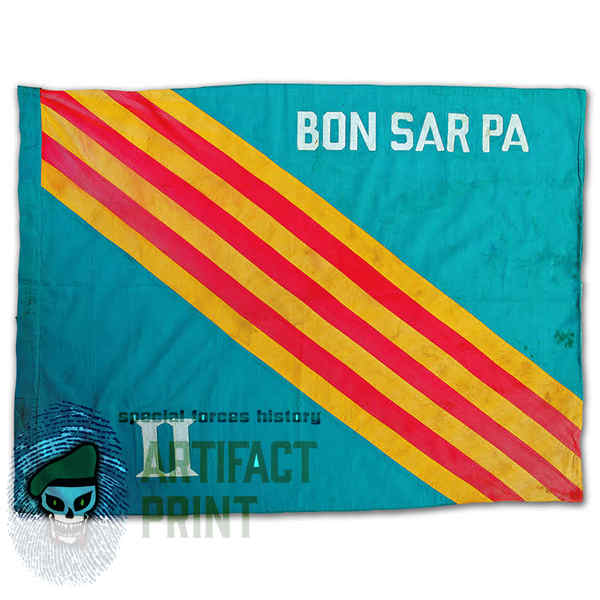 Charles Darnell’s Bon Sar Pa Camp flag and Company guidons that he souvenired after the Montagnard uprising that led to the closing of the camp.

Charles B. Darnell Jr. served four tours in South East Asia (SEA). His first tour was in August 1961 – February 1962 with the 7th Special Forces Group (SFG (ABN)) assigned to Project White Star in Laos. He returned for a second tour in August 1964 – February 1965 with the 1st SFG (ABN) assigned to Bon Sar Pa, RVN and later established Eagle Flight (pressor to the Mike Force). Charles third tour was in November 1966 – December 1967 with 5th SFG (ABN) assigned to Project Omega and later the B-55 Mike Force. Darnell’s last tour was in June 1970 – July 1971 assigned to the 46th Special Forces Company (46th SFC), Thailand as the Operations Officer.

Lieutenant Colonel Darnell retired from the Army in 1974 after twenty–two years’ service with thirty-six months in Vietnam.

In 1958, the BAJARAKA movement was established. The name was an acronym that represented four main Montagnard tribes (Bahnar, Jaria, Rhade and the K’Ho) of the Central Highlands of Vietnam. The organization petitioned the French and US Embassies to help convince the United Nations to denounce the South Vietnamese Government’s acts of racial discrimination against the country’s ethnic minorities. The group staged several demonstrations before the leaders were arrested and imprisoned under various charges that caused them to fracture into several smaller bands that never took traction. The individuals were later released after a coup that led to the overthrow of the South Vietnamese President Ngo Dinh Diem’s regime in 1963.

With the unrest of the different bands, the Cambodia Head of State Norodom Sihanouk foresaw furthering his power structure and organized a meeting with all the fractions that united them under the FULRO (French: Front Uni de Lutte des Races Opprimees (United Front for the Liberation of Oppressed Races)).

The United States increased the support of the war effort in South Vietnam in the mid-1960s that expanded the Civilian Irregular Defense Group (CIDG) Program. The US Special Forces (USSF) personnel held an advisory role to their South Vietnamese Special Forces (Luc Loc Diat Beit (LLDB)) counter-parts in the recruitment and training of the indigenous Montagnard people in support of the early A- Camps.

The LLDB’s prejudice and exploitation of the CIDG indigenous personnel within the camps brought together and solidified the members of FULRO that planned and executed an uprising on September 20, 1964. The Montagnard revolt took control of five camps in the Central Highlands: Bon Sar Pa, Bu Prang, Buon Mi Ga, Ban Don and Buon Brieng. The following evening the uprising was quailed at four of the camps except for Bon Sar Pa where the US Special Forces personnel were held out of harm’s way and the LLDB were executed. The camps Montagnard personnel had divided, some of them moved across the border into Cambodia, the others remained behind and eventually negotiated a peaceful surrender.