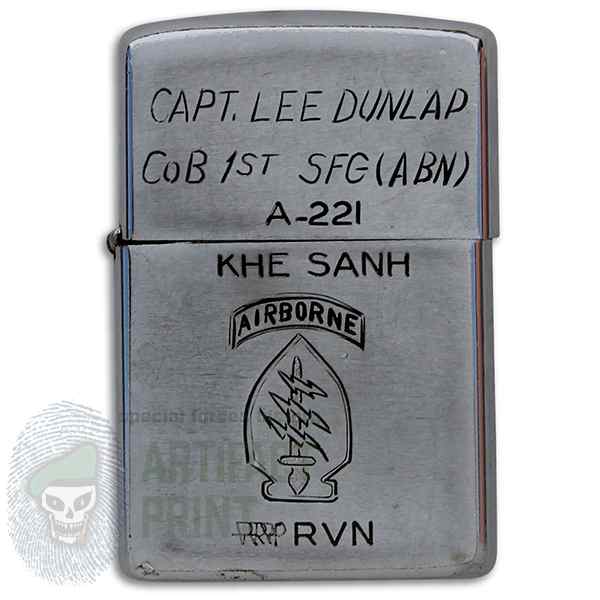 Lee Dunlap’s private purchased Zippo lighter that was engraved on the face: CAPT. LEE DUNLAP, Co. B  1st SFG (ABN), A-221, KHE SANH, RVN with a Special Forces crest in the center. The reverse reads: THO I WALK THRU THE SHADOWS OF THE VALLEY OF DEATH. I WILL FEAR NO EVIL BECAUSE I AM THE MEANEST MOTHER FUCKER IN THIS VALLEY.

Lee C Dunlap served three tours in Vietnam. His first tour was in 1962 as an enlisted man assigned to Military Assistance Advisory Group (MAAG), later Military Assistance Command Vietnam (MAC V). He returned for a second tour as an Officer in 1967 as part of a 1st Special Forces Group (ABN) Snakebite Team assigned to Military Assistance Command Vietnam Studies and Observations Group (MAC V SOG), Forward Operational Base #3 (FOB#3 / Khe Sanh, RVN) assigned to the Hatchet / Hornet Forces. Dunlap’s third tour was in 1969 with 5th Special Forces Group (ABN), C-4 as the S-3 and later as the Executive Officer (X-O). It should be noted that the veteran was Fulton Skyhook Qualified on February 14, 1966.